What is sleep apnea and what are the symptoms?

What is sleep apnea?
"Apnea" literally means "no breath" or "stopping breathing".

Many people have sleep apnea, (also known as sleep apnea) but may not even know it. In fact, sleep apnea affects more than three in 10 men and nearly two in 10 women, so it is more common than you might think.1 If you think you might have sleep apnea, it is important to recognise some of the common symptoms and what you can do about it.

The first and most common sign of sleep apnea is usually observed by your partner: snoring. In addition to snoring, they might also tell you that you make gasping or choking sounds while you are asleep.

You might notice some other symptoms too such as 2,3

Remember, these symptoms may not always relate to sleep apnea, so please discuss any concerns you may have with your doctor to ensure that an accurate diagnosis is made

What is sleep apnea?

When you have sleep apnea, the air stops flowing to your lungs for 10 seconds or longer – that is, you actually stop breathing.

Sensing you have stopped breathing, a control centre in your brain triggers you to wake up just enough to take a breath. Then you fall back to sleep and the cycle begins again. In some people, this can happen over 30 times every hour even though you may not remember waking up.4

As you can imagine, constantly being triggered back into breathing, hour after hour, night after night, can put a strain on your body.

You may feel very tired day after day yet not realise that you have been waking up so many times at night as a result of having sleep apnea.

What should I do if I suspect a problem?

If you have tried improving your sleep, but still snore or wake up feeling tired, it is time to talk to your doctor.

“If you have been told you snore, and feel tired and unmotivated a lot of the time, take time to discuss this with your doctor. Renewed enthusiasm for living and a joyous vitality may just be your reward.” 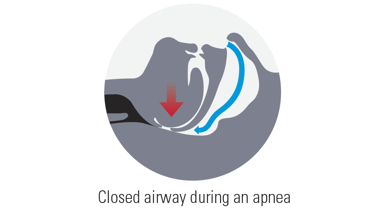 In most cases of obstructive sleep apnea, the air stops flowing to the lungs because of a blockage (or obstruction) in the upper airway – that is, in the nose or throat.

The upper airway could become blocked due to:

In some cases, the airway is actually open but air stops flowing to the lungs because no effort is made to breathe. This is because the communication between the brain and the body has been affected so the automatic action of breathing stops. People with CSA do not often snore, so the condition sometimes goes unnoticed.

This is a mixture of both obstructive sleep apnea OSA (where there is a blockage or obstruction in the upper airway) and CSA (where no effort is made to breathe). Your doctor can help you understand more about this if you need to.

If you have any concerns that you may have any type of sleep apnea, please consult your doctor.

It is important to take sleep apnea seriously.

But the good news is there is a treatment for it, and most people experience a whole range of benefits from being treated:

If you suspect you might have sleep apnea, you are only a few steps away from a better night's sleep and feeling like yourself again. Find out more by reading about sleep studies and treatment options.

How to get a sleep apnea test

If you have trouble sleeping, snore or suspect that you have sleep apnea, it’s important to take ...

There are four common sleep apnea treatment options, including CPAP therapy. Learn about all ...

The benefits of treating sleep apnea include easing common symptoms such as snoring and lack of ...